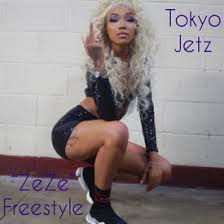 Tokyo Jetz is a rapper from Jacksonville, Florida who initially received attention over a series of freestyle videos recorded in her car. Her style is brash, aggressive, and dramatic, with lyrics focusing on the harsh aspects of street life, but she can also be playful as well as introspective. Originally a poet, she began rapping while in high school. Gradually, her freestyles and mixtape appearances attracted attention from several big-name rappers, including T.I., who signed her to Grand Hustle in 2016. Jetz moved to Atlanta in early 2017 and toured the United States with her labelmates. Following the upbeat, summery single “Sunshine Baby” and the reflective “My Story,” her label debut, Viral, appeared in August of 2017. Her sophomore full-length, Bonafide, arrived in 2018 and included the single “The One.” Guest spots featured on the album included T.I., Trey Songz, Trina, and others.